You guys… here is Part 3 in my favourite series that I’ve ever done.

Mark Leger is a Saint John lover, like me! I’ve known Mark for years, but really just “met” him while working on a Placemaking Committee through the True Growth project. 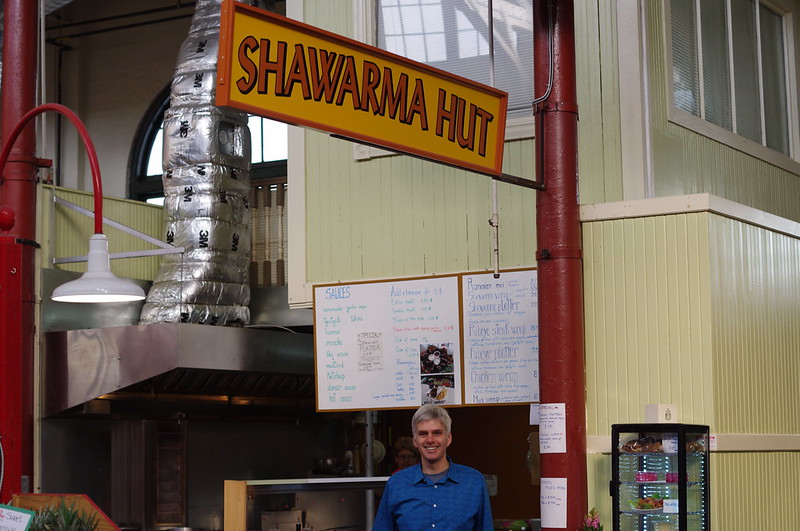 Your go-to coffee shop (and ​your ​order):

I’m a stay-at-home dad so I spend most of my time with the kids, their grandparents, and other parents with kids. As a result, I don’t have nearly enough “grownup” conversations. When I go out for coffee, I pick places that have a lot of pedestrian traffic and people I know who go there. I can catch up on their lives and talk about “grownup” stuff like city affairs, local gossip (often one in the same). Though I like Java Moose in the City Market and on Prince William, and Second Cup on King, my favourite place to go is Starbucks in Brunswick Square. I can sit there on my own to read or do some work, and several people will wander by and stop for a quick chat. I also spend a lot of time in Rothesay visiting family or taking Ella to her pre-school. I’ll often spend an hour or two at the Java Moose out there, and bump into my “Valley” friends I don’t see very often. My coffee tastes are simple. At each place, I order a small-size dark roast.

The place in ​Saint John where you feel ​calm, cool and collected:

I’m a marathon runner, so I’d have to say the open road. I run through all parts of the city, but favourite route these days is the Red Head Road toward Canaport and Mispec. The views are spectacular and the traffic is light on weekends. One of things I love about Saint John is that the more rural parts of the city aren’t far from the urban core. They’re within running distance!

I don’t shop at one place in particular. When I buy gifts, I try to support local potters, painters, and jewellers. I also buy tickets to Imperial Theatre shows or Uptown restaurants.

The place you celebrate special occasions​:

Well…as I’ve already pointed out, I’m the father of two young children, so I hate to admit this but special occasions seem to revolve around children’s birthday parties these days. Bowlarama seems to top the list! When my wife and I celebrate a birthday or anniversary, our favourite spot seems to be Sense of Tokyo on Waterloo Street.

The place that is a solid date night spot:

Shwarma Hut in the City Market. I order the falafel almost every time. Special ingredient: French Fries! The regular sized one is so large it takes me an hour to eat it!

Another question you’re asking a father of two young children. I’m lucky to have a favourite bar, let alone a “a best kept secret” one. I’ll have one of those when they’re teenagers. I have to say “happinez” even though I know this is one of the most popular places in the city. And I’ll actually drink wine there now. I used to joke with the owner, Peter Smit, that I was the guy that went to the wine bar to drink beer.

The place you go for a little bit of culture:

I’d highlight the Saint John Theatre Company, especially with the sheer volume of great shows they’ve started doing, and events they’re hosting, at their own space on Princess Street and at Imperial Theatre. In March, I attended a sold-out, hilarious comedy show featuring James Mullinger and other comics at the Princess Street space. That month, I also went to the theatre company production, “Every Good Boy Deserves Favour”, at the Imperial Theatre. Last year, I started attending – and sometimes participating in – some of the Improv shows staged by Scott Thomas and crew at the Princess Street space. They’re incredibly entertaining and creative events that include local musicians, artists and storytellers. They’ve got another one of their monthly shows coming up in May. There’s just a lot going on there, be they theatre company productions or other arts and culture groups taking advantage of a great space to host shows and events. I’m part of a group hosting an event there May 7th called Ignite SJ, an evening of inspiring five-minute talks on a range of subjects by local people, including James Mullinger. Your readers can learn more about that event on our web site: http://www.ignitesj.ca

The place you always take your out-of-town guests that wows:

Happinez, Sense of Tokyo, Suwanna restaurant on the West Side.

Where you shop for everyday basics:

I shop mostly at the small grocers around the city. I like to support local businesses with a friendly small-store atmosphere, but I also find their prices generally better for fresh fruit, vegetables, fish and meats. My favourites? Dean’s Meats and Balemans in the City Market. Olsen’s on the West Side. Cochrane’s in Rothesay.